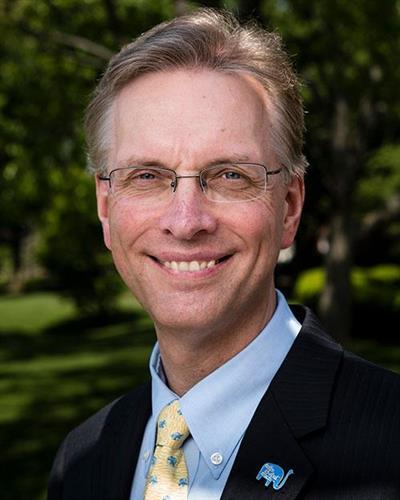 Professor, Mathematics
(617) 627-3419
boris.hasselblatt@tufts.edu
503 Boston Avenue
Research/Areas of Interest: Dynamical systems: Hyperbolicity, invariant foliations, geodesic flows, contact flows, and related topics — Hasselblatt's research, undertaken with colleagues from several continents, is in the modern theory of dynamical systems, with an emphasis on hyperbolic phenomena and on geometrically motivated systems. He also writes expository and biographical articles, writes and edits books, and organizes conferences and schools. Information about his publications can be viewed on MathSciNet by those at an institution with a subscription. Former doctoral students of his can be found in academic positions at Northwestern University, George Mason University, the University of New Hampshire, and Queen's University as well as among the winners of the New Horizons in Mathematics Prize.

While studying physics at the Technische Universität Berlin, Boris Hasselblatt was awarded a Fulbright Scholarship, which took him to the University of Maryland in College Park, where he obtained an M.A. in mathematics with a scholarly paper on dynamics before moving to the California Institute of Technology for doctoral work on dynamical systems. He has been at Tufts University since completing his doctorate in 1989. Among his 5000 published pages is Introduction to the Modern Theory of Dynamical Systems, one of the most cited mathematics books. He has held numerous visiting appointments at leading universities and research institutes: the Eidgenössische Technische Hochschule in Zürich, the University of Tokyo, the Institut des Hautes Etudes Scientifiques near Paris, the Institut de Recherche Mathématique Avancée and the Collège Doctoral Européen in Strasbourg. He was the first US mathematician to hold the Jean Morlet Chair at the Centre International de Rencontres Mathématiques in Marseille. In the Faculty of Arts, Sciences and Engineering at Tufts he chaired numerous standing faculty committees as well as School and University committees created for accreditation and for strategic planning. His administrative roles at Tufts University have been chair of the Department of Mathematics and Associate Provost. He has been serving the profession within the governance of the American Mathematical Society, the American Statistical Association and the Mathematical Association of America, on the Steering Committee of the Boston Higher Education Innovation Council, and as the eleventh Secretary of the American Mathematical Society. He is the founding editor of the Journal of Modern Dynamics and the Founding Editor-in-Chief of Mathematics Research Reports.

Dynamical systems is the mathematical theory of systems, such as in classical dynamics, that evolve in time. The motivations for this field come from classical and celestial mechanics as well as, more recently, from population dynamics, meteorology, economics, physiology, neuroscience, medicine, genomics, i.e. all across the natural and social sciences. In the modern theory of these systems the central aim is often to answer qualitative questions about long-term behavior directly from a study of the governing laws rather than through explicit expressions of the evolution itself. The grandest of these questions is whether the solar system is stable (or whether, for instance, the earth might, without influences external to the solar system, leave the solar system for good at some point). Just over 100 years ago this question started the modern theory of dynamical systems and led to the first glimpse of "chaos", and it led to another quantum leap, the KAM-theory of "order", in the 1950s. "Chaos theory" is a popular name for the study of dynamics in which the cumulative effects of the tiniest discrepancies grow exponentially over time and give rise to behavior that looks random and unpredictable. (If two people with different calculators start with x=0.3, compute 4�x�(1�x), and repeatedly apply the same formula to the output of the previous step, they will likely quite soon find wild mismatches between their results due to accumulated deviations from differences in rounding.) Hyperbolic dynamics is the mathematical study of these systems, and much of Hasselblatt's work has been in uniformly hyperbolic dynamics, which represents this sensitivity to initial conditions in the purest and strongest way and has been called the crown jewel of dynamical systems.

For a pure mathematician this is a beautiful subject to study because in these systems the truly messy long-term behavior of any particular time evolution coexists with smooth and orderly global structures in the space of possible states whose study on one hand provides a way of understanding the possible long-term behaviors and on the other hand can provide insights into the origins of the system, such as, whether it arises
Read More Career Highlights / Publications Research Professional Activities Courses / Teaching Activities