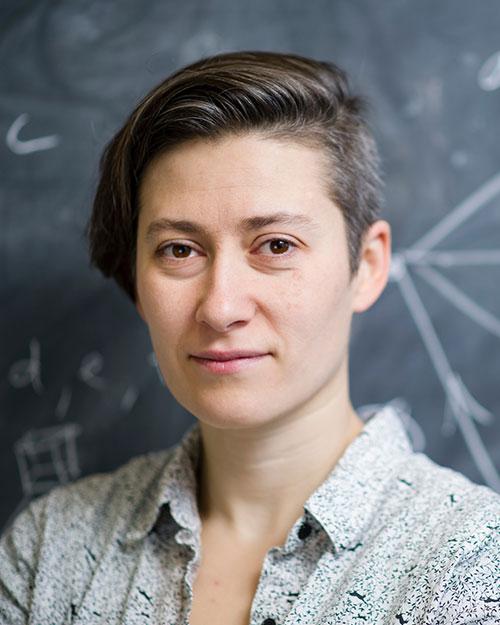 Geometry of groups and surfaces

My research is in geometric group theory and geometric topology, with tools from dynamics. I look at the metric geometry of groups and surfaces, often by zooming out to the large scale picture. I've been thinking about ways to do coarse geometry more "finely" by paying attention to properties that are destroyed by usual notions of large-scale equivalence.

Lately I am drawn to geometric counting problems, in the vein of the classic Gauss circle problem, which asks how many integer points in the plane are contained in a disk of radius r. If instead of a circle you count points inside dilates of a polygon or polytope, then you are led to Ehrhart theory, a rich subject with connections to convex geometry and algebraic geometry. You can set up a version of this counting problem for arbitrary metric spaces and arbitrary lattices of points, or devise a version for finitely generated groups. Solutions to these counting problems allow you to make very precise calculations in geometric probability. I've also been thinking about filling invariants, geometry "at infinity," and the dynamics of random transformations.

My graduate training was in low-dimensional topology and ergodic theory, focusing on an area called Teichmüller theory, where the object of interest is a parameter space for geometric structures on surfaces. Teichmüller space is a model space for the action of a discrete group called the mapping class group, which is generated by Dehn twists about curves on a surface. Other objects I look at include right-angled Artin groups and the CAT(0) cube complexes they act on; the real and discrete Heisenberg groups; billiard tables as dynamical systems; and the metrics that arise in convex geometry.

I have also worked and lectured on issues in the history, philosophy, and cultural studies of math and science, such as the role of intuition and the nature and impact of ideas about genius. I'm involved in a range of educational projects in mathematics: I am a veteran visitor at the Canada/USA Mathcamp for talented high school students; I have worked with middle school teachers in Chicago Public Schools, developed inquiry-based coursework for future elementary school teachers at the University of Michigan, and briefly partnered with the Poincaré Institute for Mathematics Education at Tufts.